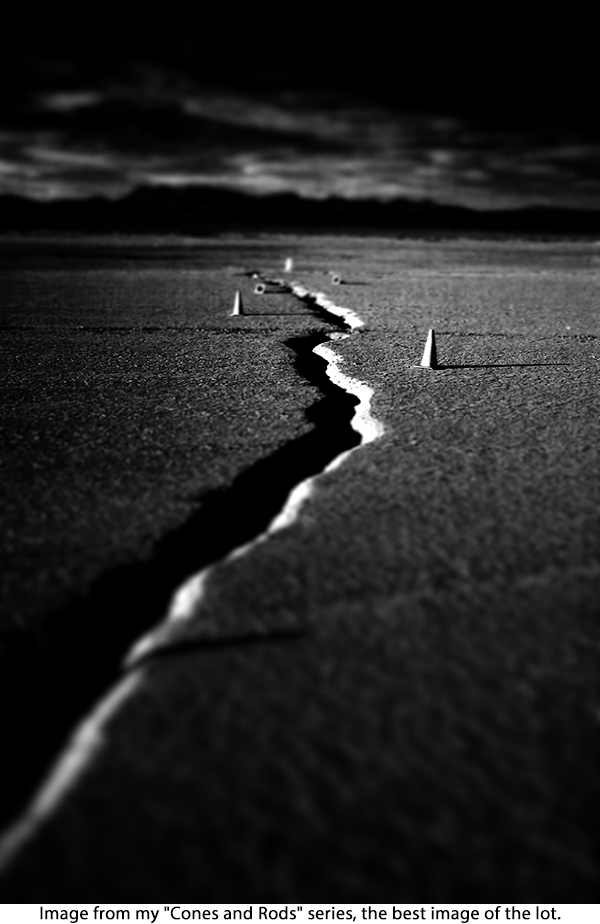 I’m wondering however whether this entire realm of belief is nurtured and promoted based less on personal or aesthetic reasons and more on a need to cater to a viewing public who need to be spoon-fed something more obvious, especially when based on the fact that we’re living in a very sound- and visual-bite-oriented society. We’re used to having many images thrust upon us without our permission, and those images that are thrown at us are done so with such vigor, especially where advertising is concerned, that we’re made to believe that those particular images are golden. What does that do to the part of our brain that should be left to making up its own mind? Doesn’t this make it more difficult for us to decide for ourselves what is worth seeing and what is not? Hmm.

Ahh, but back to the series thing. Oh but wait, an aside: Can’t the input into our eyes when turning our heads from left to right be thought of as a series of images as well? True, the brain does not have to process each of those images individually, in fact I would say only the first and last images in a single head turn, and especially the last one, we’ll call it the “goal image”, the image which caused you to turn your head in the first place, is the one worth processing. But everything we see is in fact a series of images. Obviously it’s safe to say that the images “in the middle” are not as important.

So, maybe the images “in the middle” of a series of photographs do not in fact need to be as strong. Maybe we’re wasting our time shooting those middle images. A good starting “gotcha” image and a strong finishing image might be enough to do the trick. The middle stuff can be ho-hum.

I think it might be true to say that the general public often has difficulty determining what is good and what is not, especially considering how much is visually thrust into their conscious on a given day. Seriously, to stop and look at something, while still within the realm of their control to do so, is perhaps in fact counter to what they actually feel like doing, or are, as of late, being programmed to do. People would rather move, not stop. Who has time to stop?

Or maybe it’s the photographers way of saying, “I can’t take a decent image of this subject, so I’m going to take a bunch of these and maybe I’ll get lucky.” So you try and try, and eventually, yeah, you do get lucky. Good job.

Now don’t get me wrong I enjoy taking series of images also. I began doing it about 10 years ago, after someone asked me, “Why don’t you take a series of images?” I obliged and I was happy with the result. But I can’t help but wonder if this has caused me to be lazy in some way.

And I suppose you could zoom out and take a broader look at that big fractal. For example even if I’m not taking a series of images of one subject, if I am taking a lot of random landscapes, you could certainly call that a series of landscapes. Come to think of it, is it even possible to avoid taking a series of images in the first place? Pretty much any image you take on planet Earth could be considered to be a series about, well planet Earth, eh? And don’t even get me started on the universe.

About the only way it’s possible to successfully take a single image is to only have shot one image in your entire lifetime. And there’s a pretty good chance that this image is going to suck. But thankfully, no one will be able to tell the difference.

3 thoughts on “Single Image or Series…What Does It All Mean?”