Having missed Photo LA for the last two years and growing a little disappointed with the show, I was pleasantly surprised by this year’s event. It was clean, fresh, and much easier to navigate than past shows. This year I opted to take a docent tour led by Eve Schillo, Curatorial Assistant in the Wallis Annenberg Photography Department at LACMA. Schillo added more relevancy with her running commentary on many of the artists and why they are considered “worthy” of inclusion. She elaborated on the labor over time going into creating many of the pieces, such as the eight-hour exposures of Chris McCaw and the prevalence of contemporary works using alternative processes such as tintype, cyanotype, and platinum.

Docent tour of Photo LA before the crowds arrive: 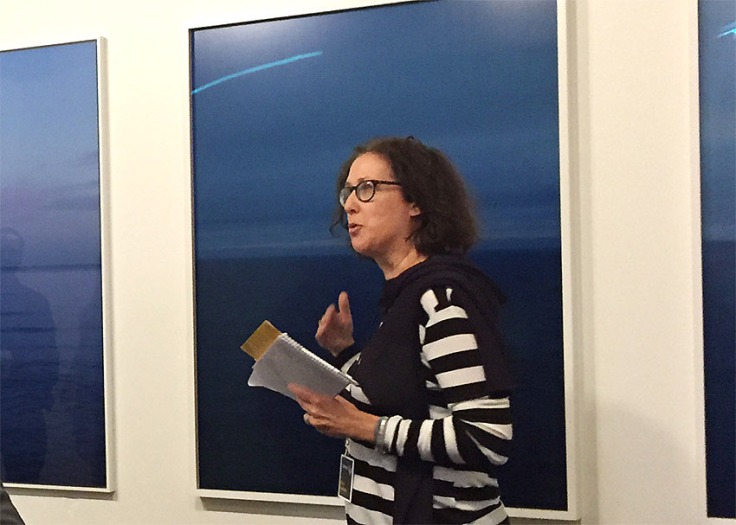 Abstracts using light as a key element by Barbara Kastin:

Also exhibiting was a Japanese company, Amanasalto, that is making platinum prints from contemporary photographers as well as masters like Imogen Cunningham. They were beautiful prints but not to be confused with originals printed by the photographer.

Copyright the estate of Imogen Cunningham, print by Amanasalto

APA LA’s Off the Clock

For the first year, 100 winning photos from the American Photographic Artist’s (APA) annual contest Off The Clock were displayed at Photo LA. If you are a photographer, this is yet another reason to consider joining APA and to participate in their many events.

A few years ago, a number of galleries that carry primarily “classic” (black & white) photography split from Photo LA and started their own show. This year it was again held at Bonhams auction house. It was easy to spend an afternoon there and enjoy looking at the variety of Classic and Contemporary photographs including work by: Ray K. Metzker, Val Telberg, Bruce Wrighton, George Tice, Brigitte Carnochan (hand colored selenium prints), Giacomo Brunelli, Pentti Sammallahti (and his book, Here Far Away) and Sebastiao Salgado. I have eclectic tastes and was tempted by a Muybridge and a lovely Bromoil by an unknown photographer…perhaps next year.

Alex Novack, the man behind iPhotoCentral:

Several years ago I became acquainted with exhibitor Alex Novack who is the man behind iPhotoCentral, an online resource and gallery collective where buyers can search an enormous inventory of photos. It’s worth checking out whether you are a potential buyer or simply want to educate yourself on what’s available.

If you are interested in learning more about collecting, I highly recommend subscribing to Alex’s newsletter. He sends it when he can (almost monthly) and it consistently contains a wealth of information from around the world.